This show from what is known only got one home media release, and that's the HBO Studio Productions VHS tape from unknown date. The tape itself is only known of it's existence by one image of the tape itself next to the sleeve which features cover art of the show. It is considered on the sleeve to be a part of the "HBO Private Screening" "The Collection" series of tapes, while the tape label shows that's it's HBO Studio Productions (styled as "HBO Studio HSP Productions") on a bland label that features "A Little Curious Episodes 1-4" with an unknown character after the episodes text, "Part 1 of 1", and "TRT" which is the run time for the tape (Find out what the first T stands for), which by looking at the low res image appears to be "1:00:00", or "1:00:20" as it is a digit longer than what was on another tape from the same series of releases with the same label that was used. The text on the bottom of the label in the green colored part of the label shows the address of HSP, followed by there e-mail address which does not work anymore.

This release is considered lost media, and is very hard to find info on.

This episode contains 4 episodes, it is unknown what episode these are, and is unknown what the official order of episodes are, or if one of these was the pilot episode from 1998, or some other early on episode that is also lost media.

Below is an image of the only known copy of the tape, followed by a label from the same series of releases from HBO that was used as reference.

The VHS tape itself next to it's included sleeve. 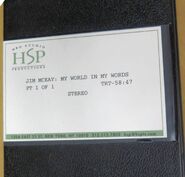 An example of what the label from this series would look like.
Community content is available under CC-BY-SA unless otherwise noted.
Advertisement